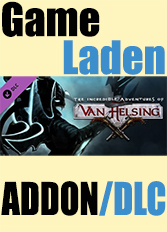 Esteemed ladies and gentlemen, allow us to present Mr. Van Helsing’s charming, beautiful and witty aide: Lady Katarina, who doesn’t really require any further introduction. Our dangerous but beloved ghost lady has proven herself plenty of times. But did you think that that was all Borgovia could offer? Well, think twice! By owning the right accessory, you can turn Lady Katarina into an even more worthy companion to the legendary monster-hunter. Expand her range of skills and allow her to learn a few new tricks – a blue-blooded ghost never rests.