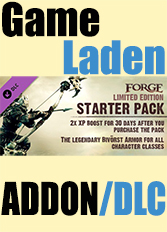 With the Limited Edition Starter Pack, players are given spectacular Bivr?st Armor set for all characters as well as a 30 day 2x XP boost. Strike fear into the hearts of even your most cold blooded foes with this glorious armor!